Just a quick note to say that the testing for Terian ID Creator v1.20 is taking a little longer than anticipated.

This is primarily due to some changes we are making to the default installation folder structure and the testing related to the installation process.

Also, one more slight change to look forward to… 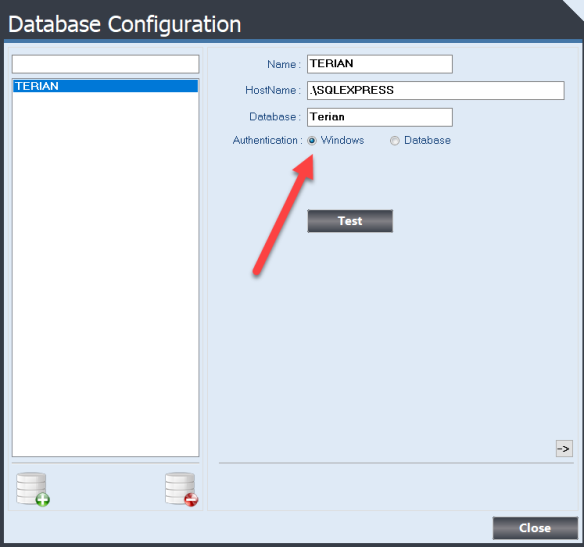 It may not seem like much, but we’ve made a user interface change to make it easier to configure Windows Authentication for connecting to the Database Server.

While this facility was supported previously it was not an intuitive configuration option. This interface change will make selecting either “Windows Authentication” or “SQL Server Authentication” as the authentication mode used to connect to the Database Server considerably easier.

In addition to Terian ID Creator, testing for Terian Image Capture Pro v3.20 has also been extended and the release of both products will hopefully be in the not too distant future.

Following on the heels of Terian ID Creator v1.20 entering Beta testing a couple weeks ago, I’m pleased to announce that v3.20 of Terian Image Capture Pro has also entered Beta testing. Similarly to the Terian IDC Beta test the plan is to continue testing for the next couple of weeks, and hopefully the public release will follow shortly afterwards.

Early last week Terian ID Creator v1.20 entered Beta testing. The plan is to continue testing for the next week or so, and hopefully the public release will follow shortly afterwards.

We now provide functionality to support controlling the camera where supported by the device. This includes adjusting the cameras ability to pan, tilt, roll, zoom, as well as changing the exposure, iris and focus settings.

This functionality is provided by the device driver, and if the driver exposes such functionality it will be made available within the camera control form of the capture window.

To improve support on touch devices and High DPI screens the default font size has been increased 20% and forms have been adjusted to increase the space between form controls. This should help improve readability and reduce incorrect control activation when using touch devices.

Support for Indesign CC 2017.1 has been improved, as well as a few other minor fixes. Changes have been made to the development environment and the SDK used for Video Capture.

If testing progresses well and no major hurdles are encountered, as stated above i hope to release to the website within the next couple of weeks.

I also plan to migrate the improved capture functionality to Terian Image Capture Pro in a future release.